The Priestess of the Flame Lineage

“Lilith symbolizes the role women once held as guardians of humankind’s original nature, way of life, and spiritual root. For this reason, womankind was once known as the Keepers of the Flame: those who oversaw and guided with wisdom and vision the way humans organized themselves in all affairs which governed their lives.” – Lilith Keepers of the Flame

A few years ago, I came upon a book, or I should say I was led to a book that told the true story of Lilith and of my lineage. The book is called Lilith the Keepers of the Flame and as I began to read it, I felt my whole body recognize the words I was reading and I began to cry. I couldn’t believe that I was reading about my lineage, the one that I had been given in 1985. Word for word everything I had been talking about for years regarding women’s authentic power was validated. You can imagine what I was feeling, joyful and fulfilled that the lineage I had been given was real and something that had existed 6,000 years ago.

I knew that the true story of Lilith needed to be shared and restored back to the role of the original archetype of the feminine. I knew that it was time to share this message with women everywhere.

It was time to teach about the corruption of the feminine, and that our original myths and teachings were distorted and had been altered to fit a certain agenda held by those in power. I also knew that I had committed to being one of the women to share this message as a lineage holder of the Priestess of the Flame. That is why I have written this book so that I can pass on this message to you.

I hope that as you read this material you will also begin to connect with the message that Lilith the First Woman as the new archetype of the Divine Feminine has for you and open yourself to embodying the energy that she represents.


My Story
As I relaxed in my bath, appreciating the glow of the candles and the soft scent of my favorite incense and music, I felt something calling me to look at the candle flame in the corner of my bathtub. I focused my gaze on the flickering flame and to my amazement, I saw an image. At first, I did not know who the person was that I was seeing in the flame, and then I realized that I was seeing myself dancing around a flame in the temple of Isis.

I suddenly heard a voice speak to me as if from above my head. It said, yes this is you as Enjara Priestess of the Flame. You were me in another life as a priestess in the Temple of Isis. I knew that as the women were watching me dance around this flame, they were waking up to some aspect of themselves.

After this event, I felt curious and wanted to find out more about Enjara and what this lineage was all about. I thought I should recreate my bath scenario and see what might happen, but Enjara had something else in store for me instead.

A few days went by, and the day came that I was to have my private channeling session with a well-known channel. I was so excited as finally after waiting weeks I would get to speak with one of Yogananda’s first teachers, Swami Sri Yukteswar Giri. As I sat before the channel awaiting her first words, I was surprised that she asked me if I knew of a priestess named Enjara? I said yes, and she said, “Well, she wants to speak to you today through me. There are five priestesses circling above you, and Enjara wishes to tell you something.”  I was curious, of course, and so I said fine and waited for Enjara to speak through the channel.

Enjara told me that she was a priestess from the Temple of Isis and a lineage holder of an ancient lineage that was taught in the Temple of Isis, and she wanted me to bring this lineage and its teachings back to modern women. She then asked me if I was willing to do that? The name of the priestesses that I had felt was watching me dance around the flame were called, Priestesses of the Flame. No other information was given to me, but it didn’t seem to matter because I immediately said yes and felt ecstatic bliss fill my heart.

Now, I had no idea what this lineage was about, or what I was supposed to do with it. I really did not even know what I had agreed to do. I knew that I was already doing sacred dance and thought it might have something to do with that, but I wasn’t certain.  I just walked out of that session as if I were walking on air. Later I realized that I needed additional information, so I decided to recreate my bath experience and see if I could bring back Enjara.

That night, as I went about creating my bath environment, I became excited. What could this mean, and what might I find out? I stepped into my bath and lay back against the pillow. I then decided to look into the candle flame again and see if any images appeared. Sure enough, it happened again. I saw myself dancing in front of a flame and I knew I was in the Temple of Isis.
I then heard Enjara speak to me. She told me that she was happy I had accepted her invitation to bring forth my lineage to modern women. I asked her, not knowing what else to ask at that moment if she would show me a picture or symbol of the lineage. So, she showed me an image of my lineage as a Priestess of the Flame in my mind’s eye.

This image is depicted above and was later created into a large drawing which I used as my logo for quite a while. She then told me that I was to have a priestess training program based on this lineage. Again, I could not even conceive of this happening at that time, and I laughed.

How I Found Out About My Lineage
As I have already mentioned in my introduction, I discovered the origins of my lineage in a very serendipitous way. One day while at work, I saw an email that spoke about a book on Amazon, something I thought my client would want. So, I went to the page, and there I saw an advertisement for a book called, Lilith Keepers of the Flame. I immediately felt a rush of energy and started to cry in excitement as I knew this book was meant for me.

I purchased it and began to read it later that day. Right away, I felt that I was reading about my lineage and that finally, I could validate the material that I had been developing and speaking about for years.  I felt that knowing where the lineage came from and what it meant gave me the missing pieces, I needed to carry the work forward.

As I continued to read about Lilith and her new role for modern women, I was amazed and thrilled that I now finally understood why she was so important for women to connect with, especially at this most crucial time in our world.

As the old paradigm of the world continues to collapse, new archetypes of the feminine are needed. Lilith is this new archetype for the feminine. The Divine Feminine and much of the mythology of the goddess have been corrupted by the male dominator culture that we live. Many of the original myths of the goddess have been altered and rewritten to serve the agenda of organized religion. There is nothing that has not been distorted in some way by patriarchal values and the dominator culture in which we live.

The only way that we can move forward is by re-establishing new values and new ways of being, not by trying to save or change the old system. The New Earth requires that we clear out the old dominator programming that we have all been enslaved by and lived by.

Each woman carries within herself the memories of the dismemberment of the feminine energy or the “rape of the feminine.” By weaving a new Her Story, both personally and collectively, we reclaim the original innocence of the feminine, in its purest form. The current energy of the feminine has been corrupted by mankind and manipulated for its own purposes.

We must now restore the pristine wholeness of the feminine back to Gaia and to Gaia’s children so that She can once again flourish as Eden. The first step in accomplishing this is to reconnect with Lilith, the First Woman’s energy, as the representative and new feminine archetype.
A new frequency of the feminine has been coming on to this planet since 2011 but as we usher in this New Age the time for all women to remember and reconnect with this new archetype of Lilith and the new feminine energy, is here.

As we begin to create our new world, we must have new templates for the masculine and feminine in place, and so I invite you to join me in stepping into your authentic feminine power now. 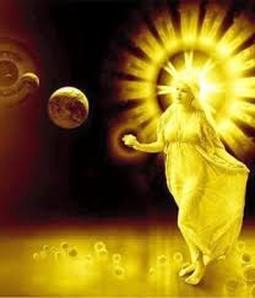 In 2011 with the Solar Eclipse, when Venus crossed in front of the sun, a new age for the Divine Feminine was ushered in.

This new energy was called the Solar Feminine and meant that for the first time in thousands of years, the Divine Feminine would take the lead and assume leadership in the world.  Today Venus still leads the way in symbolizing that the feminine is rising and will not be denied.

​This energy infused my body and shortly after I brought forth the training I had committed to bringing forth so many years ago, the Priestess of the Flame Initiation and Training.
​
In 2017 I was led to a book that literally changed everything for me. It is called, Lilith the Keepers of the Flame. This book held the key to my lineage and with it, I discovered what it meant its true name and the story of its origin.  (See above). It was because of this book that I understood my personal mission and what I was to bring forth in its fullness and thus was birthed The New Feminine Mystique, a Pathway to Your Sexual Wholeness and the New Feminine Rising.

The New Feminine that is rising is one that is free from the distortions of the dominator culture that we live in and its patriarchal influences. Lilith as the First Woman is the original archetype of woman as the Mother of Humanity and her role as the Sexual Initiatress. The New Feminine Rising is the Ascension of the feminine in our world today. As the feminine rises in every woman the New Masculine can then begin to rise as well and we can begin to live in partnership creating the New Earth based on these new paradigms.